Blog
You are here: Home / Blog / News / Giving Hope and Shelter to the HIV+ Women

The beddings Janes’ two boys used to sleep. They were using old clothes and sacks and torn blanket to cover themselves

In April 2014 when her husband died of HIV and AIDS, Jane Nyambega became a widow at only 34 and was left alone to care for her 3 children.

Her two sons aged 16 and 9 turned out to be HIV positive and thankfully her daughter 13 years HIV negative.

After the demise of her husband, the family in-law accused her of killing her husband and tried to banish her out of her marital home. Nevertheless, she sought assistance from the area chief who heard her cry in January 2014 and directed the land to be equally divided among her brother in laws and her.

Unfortunately, when the land was sub divided it was discovered that her house was built on a section of her brother in-laws’ land. As a result, a notice of eviction was issued to her and was supposed to move by October 2014.Since Jane did not have any resources or support from any family members or friends she stayed despite the wrangles

Florence and her family used these beddings on the floor

Florence Barongo 53 years of age was widowed in May 2004 – her husband died of HIV/AID and left her to cater for their five children; 4 girls and 1 boy. After the husband’s death, her in-laws began troubling her life and family. During that period her mother in-law passed away and was accused of her husband and mother in laws’ death. A week later, her daughter Lorna disappeared from home   – later discovered that she had been kidnapped and locked up in her uncle’s house. Well-wishers rescued and brought her back to their already troubled home.

She disappeared again this time for one and half years and came back home pregnant and HIV positive. Her uncle had defiled her several times and introduced her to prostitution. In February 2013 Lorna passed away.

Earlier, In October 2009, her in-law argued with Florence son and during the confrontation he stabbed him leaving him critically injured. Florence continued to receive awful mistreatment and threats – to either accept wife inheritance or get kicked out of the homestead.  Florence was so devastated and decided to move out of her marital home to a rental house for the fear of her life and children. 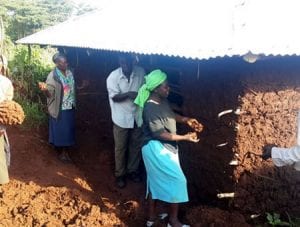 HEART partners and friends, Dr. Manu Chandaria and World Women Changers contributed resources towards the construction of a home for both Jane and Florence.  Jane states that her children are sleeping in a safe and comfortable house unlike before where they were using sacks on the floor. “I am happy that I now own the best pit latrine in my village which I never dreamt of in my whole life. I had been using theirs but now I have gained the respect which I never had from them as a result of HEART’s assistance.” exclaimed Jane!

Florence now has peace of mind; because of HEART she has a place to call home. She is so glad to be away from her in-laws who made her life a living nightmare.  Initially, she had been living in fear but now her mind is settled as she has a comfortable place.  She is grateful to HEART for the support of paying her rent for two months and for the efforts of building a house and pit latrine for her family.  Florence humbly says “My heart is full of joy, I feel like singing and dancing to the Lord for what He has done for me through HEART and its partners.”