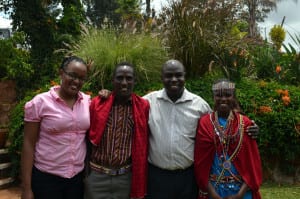 The future looks blurry when you grow up in a family of 22 siblings, three mothers with only one father. The woman has no say in the Maasai community and the boy child is always given priority when resources need to be allocated. Growing up in a male chauvinistic society, Magdalene Nkaai was concerned that her desire of going to school would never succeed. She had witnessed many girls her age endure early marriage, sexual harassment, Female Genital Mutilation (FGM) and even discrimination in terms of access to education. Her mother, who is the second wife, has five children and Magdalene is the fourth-born. In 2006, when Magdalene was 10 years old, she went through the process of FGM. She knew the next thing would be she would be married off.

Fortunately, for Magdalene, the government of Kenya was offering free access to Primary School education and Magdalene grabbed this opportunity! Magdalene worked very hard while in Oldonyonyokie Primary School and managed to obtain 309 marks in her class 8 national examination. In a class of 7 girls, she was the only girl who aced her exams. “The rest all failed and most of them are married off or pregnant with many children.” as she reminisces.

Magdalene’s other sisters dropped out of Primary School because of early pregnancy and the father married them off. Her brothers, on the other hand, also dropped out because they had family obligations. Nevertheless, this did not discourage Magdalene from working hard.

Magdalene’s father was quite impressed with her determination and decided to invest in her education. The father burnt and sold charcoal to raise money to send Magdalene to secondary school. However, this money was not sufficient.  They decided to approach the local bursary fund for support, and she was fortunate to access some funds because of her exemplary work at school.

Magdalene was then admitted in Noonkopir Girls High School, but tuition fee was very high and the father could not afford to pay for her anymore. The father tried selling some of his goats, but the drought in Oldonyonyokie had prevailed. Being the apple of her father’s eye, he approached family members to fundraise money for Magdalene. However, money was limited and the family members had needs of their own.

In the year, 2013 Magdalene’s future looked dim and there seemed to be no hope of completing her secondary education. Money was scarce and her father thought it would be wise for her to drop out of school.  Luckily, her primary school teacher, Patrick Sayianka, heard about her case and brought it forward to HEART. Through the support of Women Leader’s in Action (WLA), Magdalene was privileged to continue with her secondary school education. She obtained a grade of B- in her Kenya Certificate of Secondary Education (KCSE) in 2014.  Magdalene is the only child out of the 22 siblings who has gone to school. She is indeed the pride of her family and the fact that she is a girl child! She would like to study for a Bachelor’s of Commerce degree. In the near future Magdalene would like to start her own business. Her desire is to mentor young girls in her community and support her siblings’ children in offering them a lifetime opportunity that she was offered and benefited from.