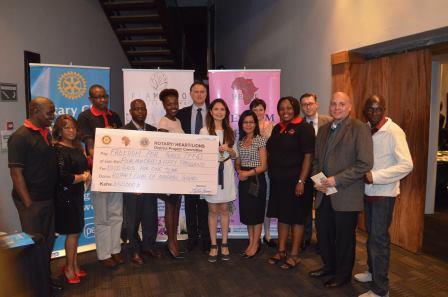 Studies indicate that sexual maturation upsets the balance of both girls and boys and, consequently, impacts their education.  However, menstruation further complicates the girl child’s challenges.

Sanitary wear is beyond the reach of many girls in Kenya because they are too expensive for either them or their guardians to afford. UNESCO estimates 1 in 10 African adolescent girls miss school during menses and eventually drop out.

The Rotary Club of Nairobi Gigiri teaming up with Flamingo Horticulture embarked on an ingenious idea of selling fresh roses and lilies weekly at the US Embassy, Kabete Kindergarten and Peponi School to raise funds to keep girls in school. In a colorful event at The Tribe Hotel, Nairobi, on 17 June 2016, President Tatiana Romero whose passion for the girl child drove her to initiate a fundraiser thorough a weekly flower sale at the US Embassy, Peponi School and Kabete Kindergarten, spoke of how heartbreaking it was for her when she first heard that girls in Kenya miss upto 5 days of school per month for lack of sanitary towels. She said further that the thought of girls sitting on soil and some using old rags to take care of their monthly period was the reason was she will continue the fundraiser to ensure that more and more girls are no longer missing school but are empowered because they are the future.

The Rotary Club of Nairobi Gigiri presented to Freedom for Girls (a sanitary towel project that was initiated and formed in the year 2006 by Rotary District 9212and Lions Multiple District 411A) Ksh. 450,000 ($4,500) to that will help keep 1,000 girls in school for yet another year and through the club President’s personal networks, 3 other possible partnerships raised an additional Ksh. 315,000 an equivalent of 700 girls! Mr. Thomas Frankum, on behalf of Flamingo Horticulture, the company that donates fresh lilies and roses every week said that his company believes that the girl child should be empowered to take up leadership roles and education will be the key to that empowerment. To receive the donation on behalf of HEART was Nicholas Kamatu, the Kenya Director of Operations, Isaac Mzee, Program Coordinator, Lydiah Njoroge, Freedom for Girls Program Manager who gave an overview of what Freedom for Girls is doing for the girls of Kenya and Mary Mwaura, the OVC Program Manager.

The Board of Trustees was represented by Pastor Elijah Wanje who thanked the Rotary Club of Nairobi Gigiri for bearing the burden of the Kenyan Girl Child. HEART will continue giving oversight to the weekly flower sale at the US Embassy to ensure that the fundraiser continues and that more girls are kept in school.